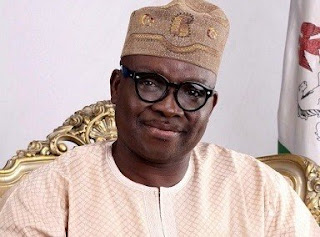 Justice Nnamdi Dimgba of the Federal High Court in Abuja has ruled that the order he gave on July 20th authorizing the Economic and Financial Crimes Commission to seize some properties belonging to Ekiti state governor Ayo Fayose is valid and that the properties must remain seized until investigations by EFCC is completed.

Ruling on an application by Fayose’s lawyer, Mike Ozekhome asking the court to set aside the interim forfeiture orders, Justice Nnamdi Dimgba ruled that the order of interim forfeiture did not violate the provisions of section 308 of the Constitution which confers immunity from civil and criminal proceedings on Fayose.
“It is my considered opinion that the order of court, made on July 20, 2016 in respect of some property of the applicant, and within the limited scope and duration within which it was obtained, was duly procured and does not offend the provision of the Constitution referred to.
Although Section 308 of the Constitution serves to isolate governors of states from the distraction of litigation and legal proceedings, to enable them to attend to official responsibilities, it should not be interpreted in such a way as to defeat the fight against corruption, to mean that the EFCC or other investigating agencies cannot take a peep into the assets or personal accounts of a serving governor in the execution of a strictly worded and mutually supervised interim attachment orders for the purposes of obtaining evidence for use in future when the immunity has lapsed.”he said ‎
Among Fayose’s properties that have been seized are four sets of four-bedroom apartments at Charlets 3, 4, 6 and 9, Plot 100, Tiaminu Savage, Victoria Island, Lagos. The two others are at 44 Osun Crescent, Maitama, Abuja and Plot 1504 Yedzeram Street, Maitama Abuja.

Are you growing in Grace? - Open Heavens Devotional by Pastor E.A Adeboye