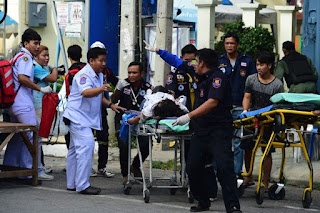 According to reports from Mirror Further blasts heard hours after two explosions leave one dead and 23 injured.
The reports four more blasts have hit Thailand just hours after two bombs killed one person and wounded 23 in the popular tourist destination.

At least three people were wounded in twin explosions, which happened at around 9am local time (2am GMT) near a clock tower in the seaside resort of Hua Hin, south of Bangkok.

Read This! The Recent Earth Tremor, Residents Apportioned it to the Activities of Prostitutes And Homosexuals
The first bomb exploded near a police box, wounding one Thai man, a police officer in Phuket said. The second exploded 300 metres away and nobody was hurt, he said.