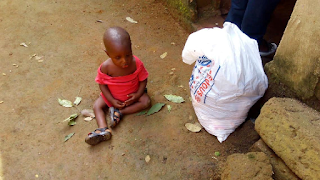 With hunger and starvation in the country, people do unexpected. But that does not warrant any parent to abandoned his or her own flesh and blood. it is quite a pity!

A woman dumped her one year and five months old baby at the Assemblies of God Church, Obudu, Cross River State last week in order to get the pastor’s attention to the plight of her family.

The woman identified as Monica dumped her son at the church on Thursday, August 4th at about 2:30pm with some clothes after the district Reverend of the church, Francis Agianpuye had given her N1,000 some days earlier.

According to CrossRiverWatch, Reverend Agianpuye said  he when he discovered the child, he sent some youths to find the mother but they couldn’t find her. Rev. Agianpuye reported the matter to the Obudu division of the Nigeria Police Force before he took the boy back home to take care of him.

The woman returned later to pick up her child.

Stunning! An African, Tonye (De-Boy) Has Broken the Record After Walking 60km With A Ball On His Head

Shocking! Man Beats Wife To Death For Refusing To Give Him Sex