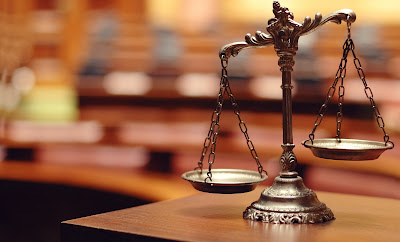 Sunday Dennis 31, father of one, was on Tuesday August 09 2016 brought before a Badagry Magistrates’ Court in Lagos State for allegedly stabbing his wife, Blessing, with a screw driver.

According to Punch the accused who resides at No. 6, Aro St., Ajara area of Badagry, was arraigned on a two-count charge of assault and threat to life.

The Prosecutor, Insp. Innocent Uko, told the court that the accused committed the offences on July 25 around 8: 00 p.m at the mentioned address.

He said the incident occurred when the accused was arguing with his wife over a certain amount of money.

“They were arguing because his wife borrowed him a certain amount of money and he had yet to return it.

“In the middle of the argument, the accused threatened to kill her with a screw driver and stabbed her at the back.

“She is presently at a hospital recovering from the injuries she sustained from the assault,’’ he said.

Uko said the offences contravened Sections 56 and 171 of the Criminal Law of Lagos State, 2011.

The accused pleaded not guilty to the charge.

Counsel to the accused, Mr Adeleke Ojo, pleaded with the court to admit his client to bail on liberal terms.

The Magistrate, Mr Abioldun Etti, granted bail to the accused in the sum of N200, 000 and two sureties in like sum, who must provide evidence of tax payment to the Lagos State Government.

The case was adjourned till Sept. 6, for further hearing. (NAN)
Source: Punch