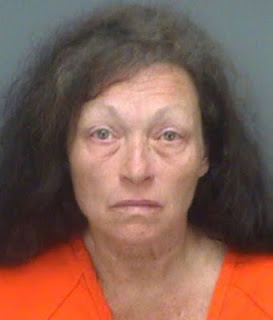 Police in Florida have arrested a 62 year old mother whose 6 year old son beat his 13 day old newborn baby sister to death after she left her children unattended in a minivan
Kathleen Marie Steele who previously starred in a US reality TV show called ’55 and Pregnant’ in 2011, has been charged with aggravated manslaughter in relation to the death of her 13-day-old daughter, also named Kathleen. Steele gave birth to the baby after being artificially inseminated with preserved sperm from her husband, who died of cancer in 2011
Police said Kathleen left her three children- the baby, her 6 year old son and her 3-year-old daughter- in the car for at least half-an-hour to run several errands when the attack took place.

It was learned that while the mother was gone the baby began crying, which annoyed the six-year-old.
Officials in Largo, Florida, say he then removed the baby from her car seat before ‘flipping her multiple times back and forth, dropping her on the floor, slamming her head against the ceiling and striking her in the face multiple times. After the vicious attack, the boy put his sister back in the seat before his mother got back in the car.

Authorities said that when Steele returned, her son tried to tell her something was wrong with his sister, saying, “It’s serious.” Steele at first ignored him and stopped at another store before noticing the infant’s injuries, cops said.
“I’m telling you this kid’s face was a mess,” Gualtieri said. “There’s no mistaking the condition this baby was in.”
The mother didn’t call for medical assistance until two hours later, after she had asked her neighbour, who is a nurse, for help.

Pinellas County Sheriff Bob Gualtieri at a news conference on Thursday said:
“The skull was cracked in numerous places, described as probably mush … one of the worst things that I’ve ever seen.”
The baby was immediately taken to St Petersburg General Hospital but was pronounced dead on arrival.

The boy allegedly told police investigators, “Sometimes people make very big mistakes.” And told them how he killed his sister, according to KHOU.
“‘I took the baby, and I slammed her like this, and slammed her down, and pushed her up into the ceiling.’ What he was talking about when he pushed her up into the ceiling, he was holding her up, then he said he was flipping her this way and flipping her that way and she would fall. The way he was describing it is he was tossing that baby around like a ragdoll,” Gualtieri said.
“The baby was beaten and traumatized,” Gualtieri said. “There was gross swelling in her face. Her skull was cracked in numerous places.”
The six-year-old boy admitted the attack but will not face charges due to his age. He has since been taken into care and reportedly has been reported to have serious behavioural issues.

Steele was arrested Thursday on charges of aggravated manslaughter and neglect. She is being held in the Pinellas County jail on $100,000 bond.