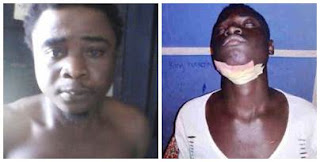 Wonders shall never end, what on earth would he do that? After these days friends no longer trust their friend.
In Tema, Ghana a 21-year-old man is currently in Police custody for attempting to behead his friend for rituals. Charles Ashitey, also known as Zaga was arrested by some residents of Tema Newtown after his attempt to behead his 19-year-old friend, Daniel Norteye, failed.

According to the Police, on 31st July, 2016, Norteye was tired after a dance rehearsal and decided to spend the night in the room of the suspect…

However, at about 4:00am, Norteye felt a sharp pain on his neck. He woke only to see the suspect, Ayitey holding a knife and cutting his throat. He then struggled with suspect, which resulted in multiple cuts in the victim’s palm and abdomen but he was eventually able to escape with the knife and was rushed to his aunt’s house where he was taken to the Tema Newtown Police Station to lodge an official complaint. He was then taken to the Tema General Hospital where he was treated and discharged.

Further investigations in the room of the suspect revealed a stinking beheaded snake, egg shells, and powder, which were sprinkled around the room. A wooden doll was also found in the room as well. When suspect was asked on how he came by those items and why he had sprinkled powder in his room, he said the snake was for a friend who was going to eat it but suspect pleaded with his friend to give it to him.

He was however unable to tell the police what he was going to use the snake and other materials for. Zaga however claimed ownership of the knife, which was retrieved and stated that he did not know what took over him to try to kill his friend. He is currently assisting the police with investigations and will be arraigned before court soon.