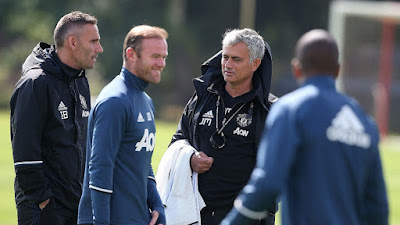 Rooney spoke to MUTV ahead of the game at the KCOM Stadium where two clubs with maximum points so far this season will go head to head prior to the international break.

“We, as players, have to adapt to what the manager wants us to do in our preparations throughout the week and, on matchdays, we try to take the game plan of the manager onto the pitch.

“It’s what we’ve tried to do and, fortunately, we’ve started the season well. We’ve prepared well this week so we’re hoping that continues. Of course, in every game you play, you want to do well and try to do your best to help the team win.

“The signings we’ve made this season have been really good signings,” he continued. “They’ve settled in really quickly and you’ve seen the impact they’ve had on the pitch already. I hope they continue and the players who have been here a while now can continue to do well. If we can do that, I’m sure we can have a very good season.”

Saturday’s hosts Hull are currently under the stewardship of Mike Phelan, who is in caretaker charge, but the ex-Red is in the frame to get the job permanently after guiding the Tigers to successive victories against Leicester City and Swansea City in the league and Exeter City in the EFL Cup.

“He obviously worked with Sir Alex Ferguson for a long time and played under him,” added Rooney. “Hull have started off great this season and I’m sure if he gets the opportunity to manage full time, he’ll do a good job.”
Source: Man Utd