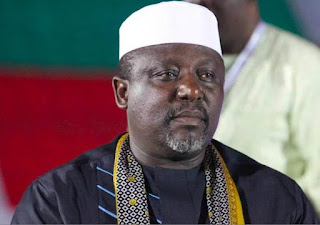 Imo state Governor, Rochas Okorocha has hit a stone in Igbo land on his plot to remove the deputy senate president Ike Ekweremadu. The plan of Rochas has now called the attention of the Ibos, who has reacted to his plan, therefore making Clergy man to a threat to disown him.

According to Daily Post, the threat to disown Okorocha was made by the Archbishop of the Enugu province, Anglican Communion, the Most Rev Emmanuel Chukwuma on Thursday, August 4, when members of the National Association of Nigerian Students, (NANS) visited the archbishop at his place in Enugu. Chukwuma, criticised Governor Okorocha over his persistent attacks on Ekweremadu, and called on the governor to apologise to the senator for harassing him‎. The cleric complained that the APC candidate Okorocha wanted to replace Ekweremadu with lacks experience.

He said: “The person who is going to the Senate under the APC is coming just for the first term; whether you like it or not, he must come and pay homage to Ekweremadu.

“How can you as a Governor who is just sponsoring one person, for the first time be threatening that you will remove Ekweremadu? It is not possible. “What I am saying is that Okorocha should apologize and he should know that he is either an Igbo man or a bastard Igbo. “He is a bastard Igbo if he does not apologize and we are ready to disown him because he is not in the same page with us as an Igbo man. If he was sent by agents from outside, they have failed.”

Recall that Okorocha, who is the Chairman of the All Progressives Congress (APC) governors’ forum, has vowed to remove Ekweremadu and replace him with a senator-elect from Imo state.

Jose Mourinho Should Be Sent To Jail For Bullying - Steferovic