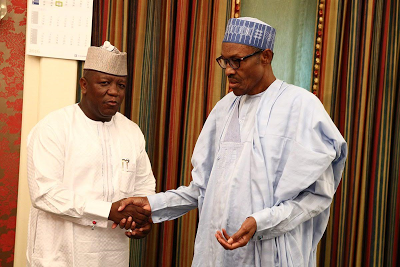 Religious crisis: All the people burnt to death were muslims- Zamfara state governor
While condemning the religious crisis that broke out in the Abdu Gusau Polytechnic in Talata Mafara in the state on Tuesday which resulted in the death of eight people, the state governor, Abdulaziz Yari, yesterday disclosed that all those killed during the attack were Muslims. Narrating what led to the attack to state House correspondents after his meeting with President Buhari yesterday August 24th, Governor said:

“From the intelligence I heard from the security agencies, there was a fight between two students and I think one of them injured the other and started shouting that the other person abused Prophet Muhammed. Other students came and beat the other boy who is Yoruba and from Kogi State. Some people are saying he was a Muslim and some say the boy was a Christian. They beat the student until he collapsed and thought he was dead. Then security personnel requested help from one shop owner who then took the boy to the hospital in his car.

When the students heard that the boy was still alive and in the hospital, they went to the hospital.  But the boy was rescued by the army in the hospital.
Then the students went back to the polytechnic and burnt down the shop of the person who gave his car to rescue the boy. They went back to town again and as you know the police in the division don’t have enough men to contain the riot and before reinforcement came, the crowd threw tyre in the man’s house and burnt the house down. That was how everybody in the house was killed and everybody killed in the House were Muslims and not like the rumours going around in the social media that Christians are being killed in Zamfara.
Infact the mob wanted to go and burn churches and attack non- Muslims but the security forces stopped them. It’s my home town and that’s where I live.”