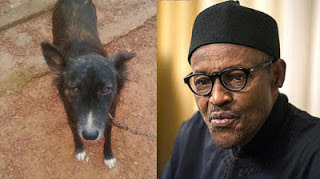 – I named my beloved pet dog Buhari, who is my hero
The Police in Ogun State, yesterday, released unconditionally, the 30-year-old trader, Joe Fortemose Chinakwe, who was arrested last Saturday for naming his pet dog ‘Buhari’.

The embattled trader, who was visibly angry after his three-day incarceration in police cell, was let off the hook around 5pm on Tuesday after the intervention of both the Serkin Hausa and President-General of non-indigenes in the state.

It was learned that the prompt intervention of the elders made the complainant to withdraw the case he reported against the trader at Sango-Ota division which was later transferred to Police headquarters at Eleweran.

However, police sources said both the complainant and suspect were made to sign an undertaking not to cause any breach of peace again. Speaking to journalists after this release, the trader, a father of two from the Niger Delta, who trades on second hand clothing lamented that he was made to suffer for no just cause.

Narrating his ordeal, Chinakwe said “It is annoying because the complainant is from Niger Republic and I am sure he is one of those illegal aliens in this country. He connived with one Police Sergeant from the Northern part of Nigeria called Musa, who works at Sango Police division to humiliate me. Worse still, the Divisional Police Officer there, did not help matters as he refused to entertain any plea from me after I was arrested that Saturday night. He simply ordered his men to throw me into the cell.”

“I did not commit any offence. I named my beloved pet dog Buhari, who is my hero. My admiration for Buhari started far back when he was a military Head of State. It continued till date that he is a civilian President. After reading his dogged fight against corruption, which is like a canker worm eating into the very existence of this country, I solely decided to rename my beloved dog which I called Buhari, after him. I did not know that I was committing an offence for admiring Buhari.

“I was intimidated and thrown inside the cell with hardened criminals for about three days. While I was there, the complainant from Niger Republic and Sergeant Musa from the North kept on taunting me saying people from my part of the country are trouble makers and that after detaining me, they will throw me into prison where I will die unsung.

”Even when my wife came with our baby on her back, they stopped her from giving me food. One of my friends that came to see me was also maltreated. “While taking me to Eleweran the next day, they handcuffed and chained me together with that my friend. Fortunately, when we got to police headquarters, both the Commissioner of Police and other officers were angry with their colleagues at Sango-Ota. ”They were wondering loudly why I was brought to the headquarters over such a minor case. It’s very unfortunate that I have to be so humiliated in my own country because of the antics of a foreigner in connivance with my brother from the North.”