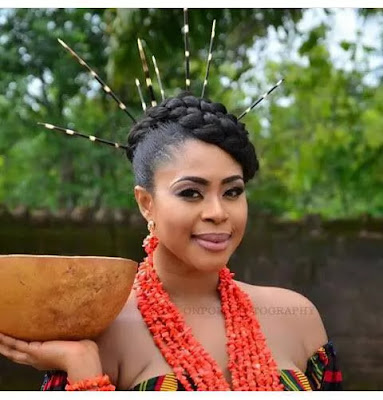 – A Stunning Decision of An Actress- Model, Mimi Orijiekwe
Actress and model Mimi Orijiekwe has revealed why she has no tattoos or piercing on her body. According to the star, she is from a very humble Christian background.

How come you don’t have any tattoo?
I cannot draw anything on my body. I see my body as a Ferrari or a Bentley. You will never see anyone write things on such exotic cars. I keep my skin clean, I don’t want any tattoo on my body because I don’t need all that. I think if I inscribe something on my body, at a point, I might not want it any more so I don’t want to do something I would want to remove later in life and may not be able to.


How about extra body piercing?
I come for a very humble Christian background. It is not like there is anything wrong with extra body piercing but I grew up knowing my mother did not have an extra piercing on her body. She is my role model and I do not want to do anything she did not do. As the only daughter in my family, my mother was and still is the only one I look up to. I learnt how to shape my eye brows from her. She did not have an extra piercing. I copied that from her. When I was growing up and saw that my friends had multiple ears piercing, I liked it at a point but I made a decision not to indulge in it because my mother didn’t do it. Mimi Orjiekwe came into Nollywood in 2010 but took a break due to some problems she encountered and also to complete her National Youth Service. She returned to the industry in 2012 and has appeared in a lot of movies including UNIBEN Babes, School Hour, Mean Girls, Ghost in the Palace, and Wrong Selfie, to name a few.
– naij.com

Shocking Revelation: Sheriff’s Name Is Not In PDP’s Membership Register In His Ward