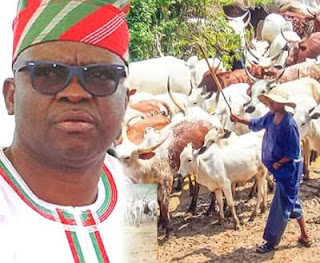 Fulani herdsmen who graze their cattle in areas that are not designated for grazing will soon be sent to jail for six months without an option of fine. This is according to a new bill titled ‘Prohibition of Cattle and Other Ruminants Grazing in Ekiti, 2016’ that was passed by the Ekiti state House of Assembly on Tuesday. The legislatures at their plenary unanimously passed the law.

The bill presently awaits the accent of the state governor, Ayo Fayose. Speaker of the House, Kola Oluwawole, while speaking on the proposed law said;

“If the bill is eventually accented to by the governor, it will now become crime for any cattle, sheep and goat to graze on undesignated land for ranches in Ekiti”. Part of the new bill reads ″Anyone found violating the bill upon conviction shall be sentenced to six months in prison without option of fine. The Governor shall by an order designates land in each of 16 Local Government Areas in the state in respect of which Cattle or Ruminants may be permitted to graze. No person shall cause or permit any cow, oxen, sheep as well as goat under his or her control to graze on any land in which the Governor has not designated as ranches” among others. The bill forbids movement of cattle by herdsmen and owners of goat in the Ekiti after 6 p.m. No cattle or other ruminants shall by any means move in the night, movement