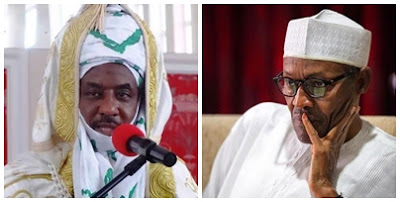 Nigerian president has been under attack from different angles based on the poor economy and hardship in the country. Recently he came under attack by the Emir of Kano.

The Presidency on Thursday said President Muhammadu Buhari would not fight the Emir of Kano, Alhaji Muhammadu Sanusi, over his Wednesday’s criticism of the present administration.

Sanusi had said the Buhari-led administration might end up like the immediate past President Goodluck Jonathan’s administration if it failed to retrace its steps on some policies.

The traditional ruler, who was the chairman of the 15th meeting of the Joint Planning Board and National Council on Development Planning in Kano State, had argued that the failure of the Buhari-led government to create employment opportunities for “the over 80 million youths in the country,” made terrorism attractive to the unemployed.

But in an interview with our correspondent on Thursday, the Senior Special Assistant to the President on Media and Publicity, Garba Shehu, said criticism such as the one made by the first-class traditional ruler was healthy for democracy.

Rather than fighting the Emir, Shehu said Buhari’s government would listen and act on the criticism.
The presidential spokesman said, “This government will not fight people for criticising the present administration led by President Buhari.  This kind of criticism is healthy for our democracy.  One cannot get better without being criticised. I can assure you that this government is listening.”
Continue reading
Punch