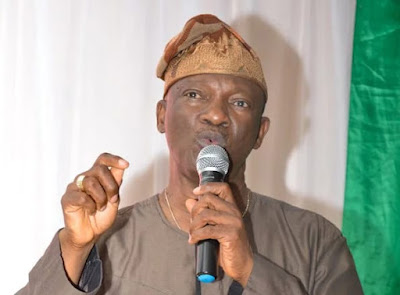 – Could APC cause more harm to PDP as crisis deepens?

– Is APC really the problem PDP facing?
Jimi Agbaje, a top contender for the national chairmanship of the Peoples Democratic Party (PDP) and a Lagos state gubernatorial candidate of the party in 2015 election, has berated the All Progressives Congress for its manner of governance. According to Agbaje, governance under the APC-led government situation was a far cry from what was obtainable under the PDP-led governments since the country returned to democracy in 1999, Premium Times reports.

He said: “It is obvious that today, the ruling party is not very interested in democracy and you can see the hands in ensuring that opposition is not made to stand. “Under the Peoples Democratic Party, you can’t take it away from our party that we allowed democracy to thrive.”
Speaking after the failed PDP national convention in Port-Harcourt on Wednesday, August 18, Agbaje said the takeover of the convention venue by security agencies prompted him to recall the past and compare it to the present. “It’s not about my personal feeling, I am comparing the past and the present,” he said.
Agbaje is believed to be enjoying widespread acceptance in other geo-political zones over and above any other candidate, in his quest to become the next PDP national chairman. He was widely tipped to be the next chairman of the party, having reportedly secured the backing of the PDP governors.
However, the convention was cancelled after a court granted reliefs sought by the factional leader of the party, Ali Modu Sheriff, and ordered relevant government agencies to stay away. Justice Okon Abang of a Federal High Court in Abuja on Tuesday, August 6, had insisted that the PDP must stop its planned national convention. The judge gave a stern warning to the Chairman of INEC, Prof. Mahood Yakubu, not to monitor the convention. The judge also ordered the Inspector-General of Police, Ibrahim Idris, to enforce the court’s order.
However, Justice Abang’s directive comes contrary to another order by Justice Ibrahim Watila of the Port Harcourt Division of the Federal High Court, directing the IGP to monitor the convention. Although the PDP convention didn’t hold as planned, the party extended by one year the tenure of the party’s caretaker committee led by Senator Ahmed Makarfi.
Source: Naij.com
Tags
My Opinion
Facebook Twitter LinkedIn Tumblr Pinterest Reddit VKontakte Odnoklassniki Pocket
Show More
Share
Facebook Twitter LinkedIn Tumblr Pinterest Reddit VKontakte Odnoklassniki Pocket Share via Email Print

Is Kim Kardashian A Feminist?