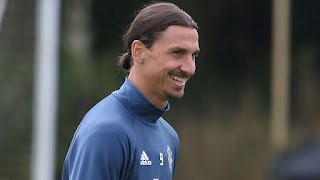 The Swedish striker will make his competitive debut in the Wembley encounter and has left no doubt as to his motives for joining the Reds on a free transfer from Paris Saint-Germain.

When asked by MUTV if the stage will be perfect for somebody of his stature, he answered: “Let’s see. I mean I believe it’s the first trophy game against Leicester. One game, one trophy. I’m used to winning trophies. I didn’t come here to waste time.

“Wherever I came, they also play to win. I didn’t come here to lose time. I came here to win. I believe the philosophy is the same for the club, especially a club like this. They are made to win.

“That is the way it is. The first game, one game and one trophy. I’ve played with the national team in England against Sweden and it’s a huge stadium so I’m looking forward to that also.”
Source: manutd