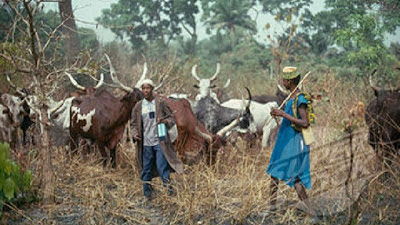 – Another Attack By Fulani Herdsmen In Enugu
Suspected Fulani herdsmen this morning attacked Atakwu community, in Nkanu West LGA, Enugu state, killing a seminarian of the Catholic Church, a mother and daughter, pregnant woman amongst others. Tochi Precious, an eyewitness at the hospital some of the victims of the attack were brought in, shared a graphic photo and wrote, *viewer discretion advised*

“Fulani is at it again! What a wicked world. I saw it with my two eyes this early morning around 4.am at Emergency Unit ESUT Teaching Hospital Parklane Enugu where two of the victims were rushed to and others were taken to Mother Of Christ Hospital Enugu.
They were attacked in their village by fulanis in d middle of the night at Amagu Attakwu Akegbe Nkanu Local Government Enugu. A seminarian who is among the victims ,just came back from Break yesterday evening only to meet his death in the middle of the night. He was butchered like cow meat and he died immediately.

This lady here and her mother are in the same condition with their intestines out. A pregnant woman was also badly injured on her head and some others who are lying hopelessly in the hospital. What a bad day. Enugu State Government pls where are u ooo..”
See Graphic Photo here

The stupid thing MEN do with a WOMAN