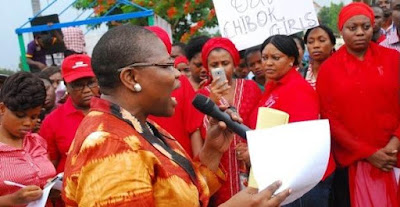 The leader of the Bring Back Our Girls (BBOG) group, Oby Ezekwesili has mocked the Nigerian military over its recent announcement that it had fatally injured Boko Haram leader, Abubakar Shekau.

The military announced on Tuesday, August 23, 2016, that Shekau had been hit during an airstrike.
“Another key issue in the last 72 hours is the military’s announcement that Boko Haram leader, Abubakar Shekau, was fatally wounded during air raids,” Ezekwesili said on Thursday, August 25, during a protest march in Abuja.

“We want it on record that this is at least the fourth time the Nigerian state has triumphantly announced killing this fellow. Today, day 864 since the abduction of our girls, time has completely run out. It is time to take decisive action and bring them home. No more delays,” she added.
Ezekwesili, a former education minister, has also criticized President Muhammadu Buhari for repeatedly saying that the government does not have any credible intelligence on the whereabouts of the abducted Chibok girls.
– Pulse

The stupid thing MEN do with a WOMAN