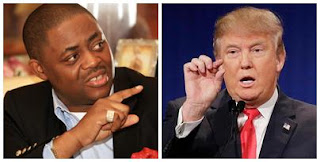 Read FFK’s piece below…
Four months ago I wrote an essay titled “Mr. Trump and Islam”. In that contribution I argued that Donald Trump, the American entrepreneur and billionaire presidential candidate, was unstoppable.
I said he would win the nomination as flagbearer for the Republican Party and then, against all odds, go on to win the November presidential election against Hillary Clinton.

The first has happened and, even though many in our country would disagree with me, the second is likely to happen as well. In my view the world needs Donald Trump and consequently I am with him all the way.

During the coming election debates he should do the Nigerian people a favour and ask Hillary Clinton one question. That question is as follows.

Why did she and President Barack Obama refuse to designate Boko Haram as a terrorist organisation until late 2014?

This was after they had slaughtered over 100,000 innocent Nigerians in the space of 4 years.

If the victims had been Americans would they have taken so long to designate them as terrorists?

Is Nigerian blood not red and do Nigerian lives not matter?

Donald Trump would never have made such a mistake or tolerated such evil.

If he had been the POTUS for the last seven years and not Barack Obama Boko Haram would have been designated a terrorist organisation five years ago.

If he had been the POTUS for the last seven years there would be no war in Syria today, Ghadaffi would still be alive and Libya would still have been at peace.

If he had been POTUS for the last seven years the American Ambassador and four others in Benghazi would not have been murdered, the Muslim Brotherhood would never have won an election in Egypt and Iraq and Afghanistan would be in better shape today.

If he had been POTUS for the last seven years Al Shabab would have been destroyed, Somalia would have been less dangerous, Israel would be safer and Iran would not have been handed a “sweet” nuclear arms deal on a silver plate.

Hillary Clinton was the Secretary of State of America when all of these things happened or were initiated. She therefore has to bear as much responsibility for them as Barack Obama does.

Unlike Hillary Clinton and Barack Obama, when it comes to foreign policy, DonaldTrump is incapable of tolerating and accepting evil from those who espouse terrorism and the cold-blooded murder of women and children as a way of life.

That is the difference between him and them. He knows what to do to the islamist terrorists and he will support any foreign government that will take a hardline against those that slaughter innocents in the name of their god.

He will crush those that wish to establish a new world caliphate in which non-muslims and moderate muslims are slaughtered or turned into slaves.

Unlike Barack Obama he will not pamper the terrorists, encourage them in some parts and treat them with kid gloves. Instead he will wage a hard, full-scale, relentless and comprehensive war against them.

He will, like Russia’s Vladimir Putin, see it as a battle of the forces of light against the citadels of darkness.

He will view it as an end-time war between the sons and daughters of God and the emissaries and agents of satan.

He will decimate the ranks of the Philistines, the Amalekites, the Midianites and all the other vultures, vampires and blood-thirsty barbarians in our midst.

He will not support a Nigerian government that has a clear-cut religious and ethnic agenda, that seeks to shame and dehumanise Christians and that is attempting to restrict the spreading of the gospel of Christ.

He will not pamper and encourage a government that goes out of its way to persecute and destroy all those that it perceives as a threat and that it considers to be its enemies.

He will not encourage a government that destroys the morale of the people, reduces their standard of living, destroys the economy and squanders its resources.

He will not prop up an administration that joins an all-muslim international military coalition even though the majority of the population that it governs are christians.

He will not stand by a government whose army murdered one thousand shiite muslims, bulldozed their homes and desecrated their graves simply because they blocked a VIP from using a road.

He will not support a President who is incapable of reaching out to those that refused to vote for him even in the name of peace and national unity.

He will not encourage a government who wages a selective, vindictive and nonsensical “war against corruption” in which the enemies of state are locked up indefinitely and the friends of the President and his ruling party are above the  law and untouchable.

He will not support a government that wages a so-called “war against corruption” in which only the President’s perceived enemies are targeted and which is not based on any cogent evidence of any wrongdoing but rather on coercion, intimidation, extortion, threats, sensational lies, media witchunts, ridiculous and unsubstantiated allegations and heinous disinformation.

He will not support a government that refuses to protect its own people from the barbarians and terrorists known as the Fulani herdsmen and which has made no arrests after thousands of non-Fulanis have been murdered and raped by those same terrorists over the last one year.

He will not support a government that sat by silently and allowed genocide to take place in Agatu and who encouraged the state-sponsored murder of many young, defenceless and innocent  IPOB protesters in the south-east.

He will not support a government that calls in Blackwater mercenaries from Saudi Arabia to wage war against his own people and is hell bent on using his army to crush the militants and good people of the Niger Delta area. Continue reading