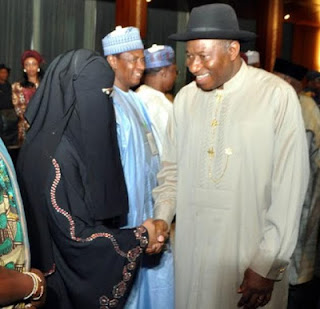 Aisha Wakil, (covered head to toe in burqua) is pictured with former President Jonathan during the inauguration of the committee on amnesty for Boko Haram on April 2013 in Abuja. Below is a 2013 report by Tony Akowe on the woman Boko Haram insurgents call “Mama.”

In a region where women are given little attention, the announcement of the name of Aisha Wakil as a member of the Committee on Dialogue and Peaceful Resolution of Security Challenges in the northern part of the country came to many as a surprise.

Even though not much is known about her, her name has consistently appeared on the list of people allegedly released by the Boko Haram insurgents as one of those to represent them in any form of dialogue or negotiation with the government.

In November last year, when the insurgents announced the names of prominent northerners who they wanted to represent them in negotiations with the Federal Government, Aisha Wakil and her husband, Justice Zanna Wakil of the Borno State judiciary, were on the list headed by former Head of State, General Muhammadu Buhari.

When the leader of the Supreme Council for Sharia in Nigeria, Sheikh Datti Ahmed, rejected his nomination into the committee, many Nigerians felt disappointed – especially in view of the fact that he is one of those that may have had any form of contact with members of the group. Ahmed was part of the botched peace deal and he believed that the government was not serious about peace with the insurgents.

Check Out What AfroCandy Shared (Photos)