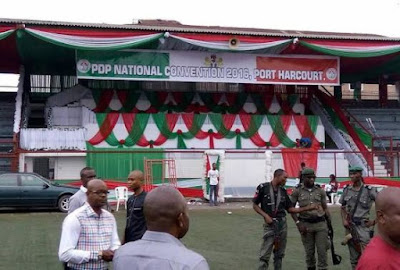 Eniola Akinkuotu, Abuja
The Force headquarters said it has sealed off the Sharks Stadium in Port Harcourt, the venue of the national convention of the Peoples Democratic Party.

It was learnt that policemen stormed the venue of the convention around 4am on Wednesday.

Awunah said the primary responsibility of the police was to protect life and prevent crisis. He added that due to the tension surrounding the convention and the conflicting court rulings, the police thought it best to seal off the venue.

He said, “The warring parties need to follow due process to end their crisis through the courts and as a law enforcement agency what do you do? You ensure that there is a superior court order. It is not about taking sides.

“If in the next one hour or two, we get another court order, we will take action. We are there for every Nigerian but when you are the first responder, you have to take action, you have to be proactive.”