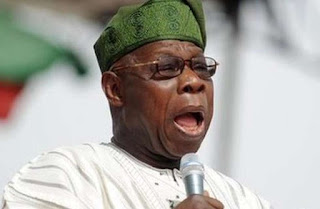 – Waku says Corruption in Nigeria was introduced by Obasanjo.
– if you don’t probe Obasanjo, then you haven’t done anything yet
Senator Joseph Waku, a former chairman, Senate Committee on Water Resources, has urged President Muhammadu Buhari to probe former president Olusegun Obasanjo or forget about his anti-corruption war. According to Waku, Obasanjo introduced corruption to Nigeria, and so Nigerians would not take President Buhari’s fight against corruption seriously if Obasanjo was left untouched, The Punch reports.

Speaking with newsmen at the Annual General Assembly of the Arewa Consultative Forum on Tuesday, August 23, in Kaduna, Waku said: “Look, I am 70 years old now and have been in this game for more than 50 years. “Therefore, there is no way I can just look at some totality of what people are saying about corruption and believe it as it has been reported to me. If I have an investigating mechanism, I know that this accusation is real obviously. “I have access to authority. I have access to Mr. President. I told Mr. President that this corruption probe of past regimes, if you don’t probe Obasanjo, then you haven’t done anything yet. Corruption in Nigeria was introduced by Obasanjo.”

Waku who served as a senator in the fourth republic and is a chieftain of the All Progressives Congress, noted that without Buhari, the ruling party would lose the 2019 general election. He said the party won the 2015 election because most of the politicians on the platform of the APC rode on Buhari’s honesty to win the 2015 election.