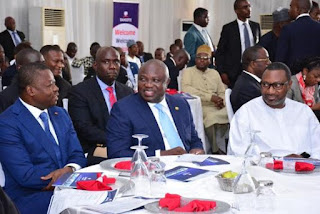 Lagos state governor hosted Togolese President, Faure Gnassingbe yesterday in quest to inspect Dangote Refinery. At a brief reception for the visiting president, Lagos state governor, Akinwunmi Ambode, said the refinery when completed will be the largest single line refinery in the world.

“This investment (Dangote Refinery) is one of the biggest in Africa today and will have a huge impact on the economy of not only Nigeria but the whole of West African region. This refinery, when completed, will be the largest single line refinery anywhere in the world refining 650,000 barrels of crude oil daily. Apart from creating jobs, this refinery will contribute immensely to solving the fuel supply challenge in the West African region”he said. 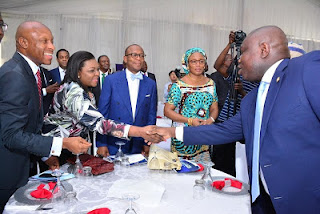 Other dignitaries at the reception included Minister of Trade and Investment Okechukwu Enelemah, billionaire businessman Femi Otedola, former governors of Ogun, Ekiti and Cross River States, Segun Osoba, Niyi Adebayo and Donald Duke respectively and others…
More photos after my style on lindaikesblog