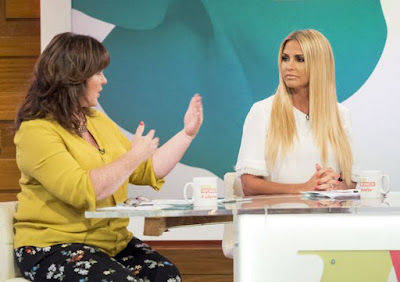 Katie Price has insisted she is NOT being bullied on Loose Women.

Worried fans have speculated that the mother-of-five has been picked on by the other panelists – particularly Coleen Nolan.

However, during an appearance on Good Morning Britain earlier today, the former glamour model set the record straight.

She said: “Coleen hasn’t been bullying me at all! It’s called banter. We give each other banter. People really take things out of context!” Looking completely unfazed by the personal question, Katie explained that she decided to make her breasts bigger for her – not anyone else.

“After Celebrity Big Brother , I had to have a lot of operations to get them sorted out,” she explained. “Then after it was all done, the doctor asked me what size I’d like to have put back in.
– Mirror