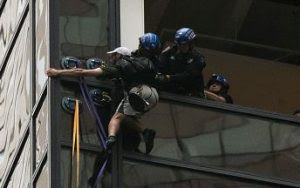 A man was taken into custody by police on Wednesday after climbing Trump Tower in New York City amidst Donald Trump’s presidential campaign. Celebrities are now sounding off on the incident on Twitter.

For more than two hours, the climber, identified as “Steve,” used suction cups to scale the exterior of the building. Naturally, police were called, and gawkers gathered to watch the scene unfold on the street. The incident was also live-streamed, and ended when cops forcibly grabbed the guy after removing a window in order to reach him.

As it all went down, Sophia Bush said to her followers, “Real talk. Do we think Trump paid Tower Steve to distract from death-threat-felony-mess, or is Tower Steve a #DumpTrump teammate? Thoughts?” Mo Rocca joked, “Maybe he just wants a date with Tiffanie Trump. Seriously why is it always Ivanka, Ivanka, Ivanka?!” Judah Friedlander said, “Maybe he’s a window washer that trump never paid. #TrumpTowerClimber Hopefully this will end safely.”

Jared Padalecki tweeted, “I would like to wish #BizarroJarpad the best of luck in climbing the Trump Tower. #???” Andy Cohen sarcastically said, “Glad someone is climbing Trump Tower – he could really use the publicity.” Josh Groban observed, “So a guy recklessly wasted time and valuable resources desperately trying to climb to the top for selfish attention? Trump move, man.”

Given the relatively calm way the situation was handled, Alec Baldwin posited, “If the guy on Trump Tower was black….” Gayle King also posted on Instagram, “Wow! Good job @NYPD got the climber at trump tower very scary at the end-man named steve said he wanted a meeting w/ @realdonaldtrump uhhh not tonite steve…” And Ellen DeGeneres shared the photoshopped picture seen below, hilariously tweeting, “On second thought, I should’ve had him hang that somewhere else.” Continue reading from gossipcop.com

TIWA SAVAGE: My Husband Pushed Me Back To Africa