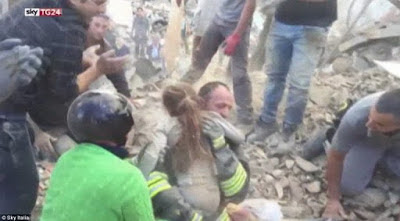 This is the dramatic moment a ten-year-old girl was pulled from the rubble after spending 17 hours trapped upside down in debris from the Italian earthquake.

The child was hauled to safety by rescuers who shouted ‘she’s alive’ as they carried her from the ruins of a building in the devastated central Italian town of Pescara del Tronto.

Footage shows just the dust-covered legs of the youngster as emergency crews tried desperately to free her from the rubble.

It was a brief moment of joy on a day in which at least 159 people were killed in the region following a 6.2-magnitude quake in the early hours of the morning. 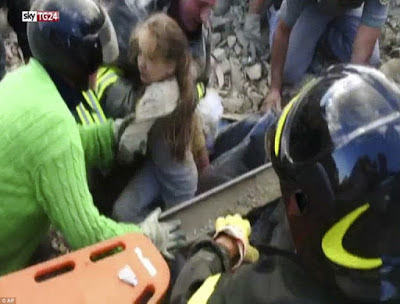 She had spent about 17 hours wedged in a collapsed building in what was once a picturesque hamlet. Incredibly, she did not appear to have suffered serious injuries.

The frantic search for survivors of the Italian earthquake was continuing tonight as witnesses likened the hellish scenes to ‘Dante’s inferno’ – and shocking pictures showed how four towns were almost wiped off the map.

Danilo Dionisi, a firefighter from Ascoli Piceno said after the child’s rescue: ‘The ten year old girl was just pulled out now from the rubble and she is being taken to the hospital and that is good news. As far as the rest is concerned, the images speak for themselves, you can see what the town looks like.’

At least 159 people have been killed, including two babies, and 100 people are believed to be trapped under rubble after the 6.2-magnitude quake struck at 3.30am local time this morning while villagers slept in their beds.

Today rescuers spoke of hearing children’s screams from the rubble and locals were spotted frantically digging with their bare hands to try and save loved ones.

One man, Guido Bordo, 69, lost his sister and her husband after they were trapped inside their holiday house in the hamlet of Illica, north of hard-hit Amatrice. Before their deaths were confirmed, he had described how he could only hear the sound of cats as he scrambled to find his loved-ones beneath the rubble. 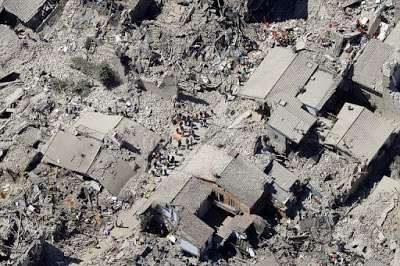 The first victim to be named by local media reports is Marisol Piermarini – an 18-month-old baby who was sleeping in her crib when the house she was staying in Arquata del Tronto collapsed. Mother Martina and father Massimiliano have been taken to hospital with ‘many wounds’ after being pulled from the rubble.

Tragically, the family had moved to the area from L’Aquila after their home there was destroyed in another earthquake in 2009.

The little girl’s grandfather, Massimo Piermarini, said he desperately tried to save his family: ‘They did not want me to go in because it was all in danger, but I said that I did not care at all, I had to go looking for them, but unfortunately for the girl there was nothing to do.’

The quake, which devastated the mountainside towns and villages of Amatrice, Accumoli, Arquata del Tronto and Pescara del Tronto, was so powerful that it even rocked buildings in the centre of Rome more than 100 miles away and was felt as far away as Croatia. Watch Video below;

Religious crisis: All the people burnt to death were muslims says Zamfara Governor