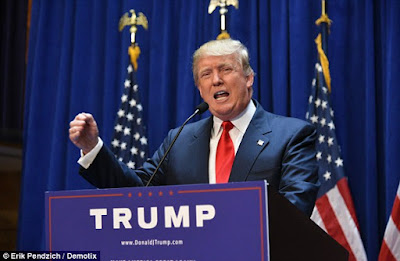 Everyone is entitled to his own opinion you know!
Republican presidential candidate Donald Trump joked on Thursday that winning the White House could be his ticket through heaven’s gate
“I figure it’s probably, maybe the only way I’m going to get to heaven,” he told a group of evangelical pastors in Florida.

In recent weeks, Trump has been losing a number of key demographics, but most polls show he is still winning the evangelical vote. An NBC poll released this week found 71 percent of evangelicals plan to vote for Trump compared to 22 percent for Hillary Clinton.

Trump called on the pastors at Thursday’s meeting to help get out the vote, saying it would be “the most important election that our country’s ever had” for religious voters.
“So go out and spread the word and once I get in, I will do my thing that I do very well,” he said.

Shocking! See This Woman Was Arrested For Having Sex With A Dog