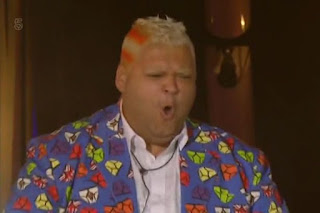 Emma Willis named the Storage Hunters UK star the fourth housemate to be booted out by the public.

Heavy was up against Lewis Bloor, Renee Graziano and ‘eternally’ nominated Stephen Bear.

Despite boos for a few of the housemates it was the self-style ‘Boominator’s name that Emma called.

Emma read a lost list of reasons that the housemates didn’t like him and Heavy said that they were all “good points”.

The reality star said that he wanted to “shake the house up” and add a “bit of spice” to the house.

“A bit of cumin,” were his exact words.
Read the rest from Mirror