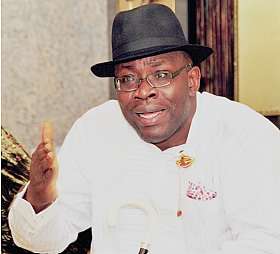 Governor Seriake Dickson of Bayelsa state has named former Niger Delta militant Africanus Ukparasia, (aka General Africa), to lead the battle against vandals and militants. The Punch reports that the appointment is part of Dickson’s new plan to stop the cases of militancy, pipeline vandalism, sea piracy, abductions and other criminal activities along the water and creeks of the state.

General Africa, who was speaking at the inauguration ceremony, promised to organise adequate security and intelligence gathering along the waterways in the region.

He also vowed that militants would no longer have the audacity to kill innocent residents and subject travelers and traders to frightful experiences on the waterways. The former militants added that the war against maritime criminals would be won with effective cooperation between the task force and the security operatives. Ukparasia also asked people in different communities to report any criminal activity or distrustful characters in their areas to the relevant security agencies.

According to General Africa, as soon as the task force commences full operation, its contacts will be released to the public for ease of communication. He assured the administration of his avowed determination to bring about peace and stability in the Niger Delta region.

EFCC Opens Up Why The Arrested Nigerian Blogger, Abubakar Usman