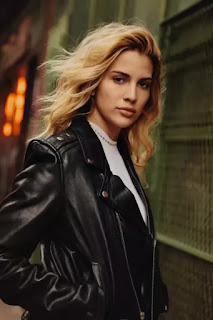 The following feature appears in the August 2016 issue of NYLON.

Bruce Weber has shot some of the most iconic images of legends like Yoko Ono, David Bowie, and Naomi Campbell, but few can say that the renowned photographer helped launch their careers. This is an honor reserved for the likes of Kenya Kinski-Jones.

When she was a teenager, her mom, actress Nastassja Kinski, organized a mother-daughter shoot with Weber in Santa Monica. In between setups, he turned the camera on Kenya and the two began shooting “just for fun.” A couple of months later, he recruited her for an editorial in Vogue España. “At that age, you’re kind of awkward and shy,” the now-23-year-old explains as we take a seat at a tiny café in SoHo, Manhattan. “But that experience sparked a real interest. I’m so grateful; it changed everything for me.”

Even though she grew up in Los Angeles, a place where photo shoots with luminaries like Weber aren’t an entirely uncommon occurrence, Kinski-Jones seems untainted by all of the drama, vanity, and inflated egos that can come with any sort of spotlight. “Honestly, it was super normal for me,” she says of her childhood. “It wasn’t glitzy; I grew up riding horses, and I was at the barn every day, dirty, sunup to sundown. That’s what I thought I was going to do with my life: be a professional horseback rider.”
Continue from source: nylon.com

Singer Jhene Aiko has filed for divorce from her Nigerian, New York based music producer husband