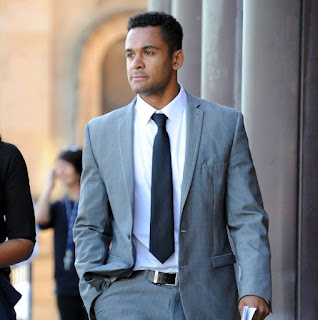 An England under-20 rugby player winger Zach Kibirige  accused of raping a woman he met on Tinder told a jury she said to him “you are going to have to try harder than that” as they passionately kissed on her bed.

England under-20 winger Zach Kibirige said the midnight encounter he had with a woman he had been messaging for a fortnight after they matched on the dating app was consensual.

The 21-year-old Newcastle Falcons player, who got three A grades at A Level and is studying for a psychology degree, said they both grabbed each other’s necks as they kissed, before they had sex in different positions.

Newcastle Crown Court heard that the alleged offences were said to have occurred over an hour when he went round to her home in November.

They were watching the film Superbad on her bed when they started to kiss, the player told the court.

The pair had agreed to just cuddle in the run-up to their meeting, the jury has heard.

At one point there was a break in their kissing and as they smiled at each other, Kibirige claimed the woman said: “I thought this was just cuddles?”

Kibirige said they carried on kissing.

Then he said: “I think that’s when it started to become a bit more passionate… hands on each other’s faces, necks, hair.

“That’s when she said: ‘You’re going to have to try harder than that’.”

When asked if this was said in an unpleasant way, Kibirige replied: “It was said with a smile on her face.”

Earlier in the trial Nicholas Lumley QC, defending, asked Kibirige: “Have you ever had any difficulty with any girlfriends?”

The player replied: “No.”

The barrister asked him: “Do you respect women?”

Mr Lumley asked: “Was that a key part of the way you were brought up?”

He denied taking advantage of his “local celebrity”.

After he had performed a sex act on the woman, Kibirige told the court he said to her: “Tell me if you don’t want this.”

Mr Lumley asked him why he made the remark.

Kibirige replied: “It was probably just sort of a teasy, flirty statement.”

Mr Lumley said the complainant had said Kibirige was “basically throttling her” at one point, so she could not speak.
Source: Mirror

You have no right to arrest blogger APC Youth writes EFCC