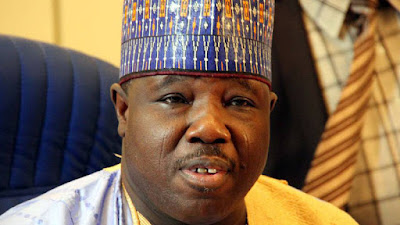 A Federal Capital Territory High Court sitting in Kubwa, Abuja, on Wednesday upheld the previous judgment of another court, also in Abuja, which ended the tenure of Ali Modu Sheriff as acting national chairman of the Peoples Democratic Party.
A member of the PDP, Danladi Ayuba, had approached the court to compel Mr. Sheriff to obey the first ruling.
He also complained that the conduct of the former Borno State governor was affecting the rights of party members, including himself.

Justice Valentine Ashi of the Maitama branch of the court had on June 29 sacked Mr. Sheriff after submitting that his emergence as national chairman was unlawful since it was based on amended provisions of the PDP ‎Constitution, which was illegally introduced in December 2014.
The judge faulted the amended PDP Constitution in 2014, which zoned the national chairmanship of the party to the North East, leading to the emergence of Mr. Sheriff as party chairman following the resignation of former Bauchi State governor, Adamu Muazu.
‎The court then made an order restraining all persons who became national officers of the party by virtue of the amended Article 47, Rule 6 of the party’s constitution, from further parading themselves in the said capacities.

Uchenna Oparaugo, counsel to Mr. Ayuba told the court that his client was not seeking an extension of the June 29 ruling but that it was important that a court of law stopped the ongoing tussle to allow members like his client the right of franchise in the party.
“The plaintiff is at stake because as a member of the PDP he has the right to vie for any position or cadre of the party,” he stated.

The counsel to Mr. Sheriff, OIuyede Ajibade, had argued that the plaintiff lacked the right to seek any redress adding that he was not a beneficiary of the ruling referred to in the originating summons.
“He doesn’t have locus standi to bring the matter to this court. He is not PDP or Makarfi. Who is he? He is seeking an Interpretation of a judgment and he is not a direct beneficiary. He has to establish a liability,” Mr. Ajibade said.
Delivering the ruling Mr. Ogbonnaya held that the previous judgment which sacked Mr. Sheriff and other leaders of his faction was valid.
“Hereby is an order restraining the defendant from parading himself, convening any convention or conference on behalf of the party except the judgment is set aside ,” he said.
Source: premium times