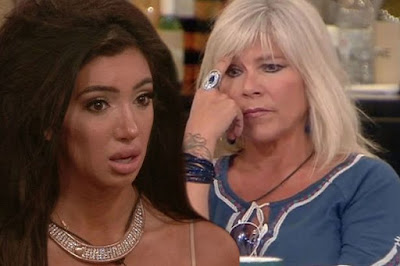 Sincerely Chloe deserves more attack than this. She is no representation of a good woman for all her stuff displayed in the CBB house
Chloe Khan has come under fire for attacking Samantha Fox.

The reality beauty “disgusted” Celebrity Big Brother fans after she took to her Twitter account and posted a frontal nude picture of her former housemate – which Mirror Online has decided not to republish.

Although some of her followers claimed the snap was fake, others were quick to slam Chloe for stooping so low as to try and humiliate Samantha
This is the worst attack on twitter I have ever seen

“Chloekhanxxx Difference between posing topless for a photo shoot and getting topless on a poll for attention. #JustSaying,” wrote one fan.

Another then posted: “@chloekhanxxx pathetic so what!! Why dont u try concentratin on spendin time with ur kid or has she seen what u did on cbb and patched u.”
Check out the photo of Chloe here

Who Is The Author? - Daily Manna by Pastor W. F Kumuyi