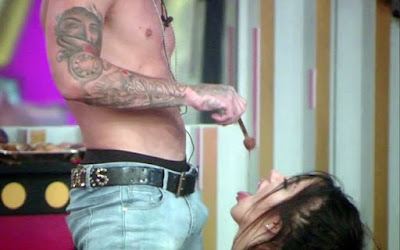 ”Chloe Khan is everything a woman should not be, what an embarrassment” This is what people feel after a show of shame.
Things have been getting steamy in the Celebrity Big Brother house and once again, Stephen Bear and Chloe Khan were the centre of attention.

Chloe and Bear put on an X-rated show after most of the other housemates had gone to sleep.

Left to their own devices, the two lovebirds started using the chocolate fountain, which housemates had been given after winning a task, to spice up their love life.

Taking a spoonful of chocolate Bear drizzled it onto Chloe’s 34HH chest and then lay down next to her and started sucking the chocolate off. At one point he appeared to pull her dress down and suck one of her ni**les, but the angle of the camera made it hard to tell. 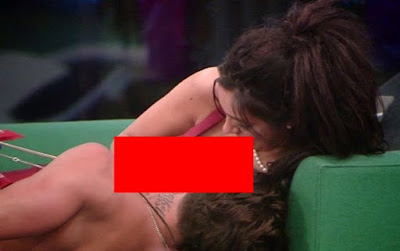 Later on, they took things further by role playing. Chloe pretended to be a woman who was up for sale at an auction, while Bear bid on her.

The couple at least had the decency to do this act in the snug away from the other housemates.

The Playboy bunny dropped down on to all fours and pushed her derriere out as she looked back provocatively at her man and sucked her finger.
Now after this act this is what people feel about her for act of disgrace to womanhood

Chloe Khan is everything a woman should not be, what an embarrassment.

More photos and video on Mirror

Mayor of Cannes bans the wearing of Burkinis on French beaches