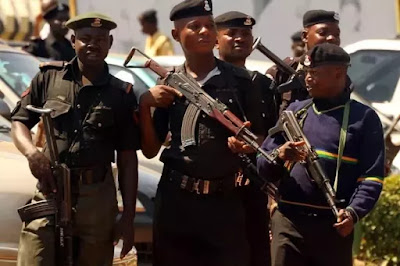 Daily Sun reports that the 23 were part of scores who allegedly invaded Ukpo community, Dunukofia Local Government Area last weekend and violently attacked a police post, leaving in their trail sorrows, tears and blood. Addressing reporters at the police headquarters, Amawbia yesterday, the commissioner of police, Sam Okaula noted that the attackers numbering about 200, who operated like suspected terrorists, had stormed Ukpo community and descended on a police post while engaging in heavy firing.

The CP noted that going by their number, they overwhelmed the four policemen on duty and, instantly , killed the security guard, Emmanuel Okafor. “The assailants went further to bomb the police post and 10-room self-contained Police Barracks, having completely burnt down two police vehicles. “DPO Ukpo, who led a patrol team to the scene was shot.

Three other policemen received various degrees of bullet wounds from the assailants” the CP disclosed. He recalled that based on intelligence gathering  by the police, prior to the attack, the assailants held a meeting at Owelle Inn, Abagana,  a hotel belonging to one Emmanuel Nwude, where the dastardly plan was hatched. He disclosed that he led a team of officers to the scene, and based on intelligence report, 10 of the assailants were arrested at the hotel in Abagana while detectives further arrested 13 other suspects from their various hideouts, among whom was one Amobi Ezekwe Ugbo, their suspected kingpin.

He noted that a team of officers from the Explosive Ordinance Department (EOD) identified and detonated an Improvised Explosive Device (IED) while recovering another one at the scene. Among the weapons recovered that were displayed to reporters included four pump action guns with two live cartridges, three AK 47 rifles , three locally made pistols, cutlasses and other arms. The CP, while declaring the readiness of the command to maintain optimum security of lives and properties in the state, noted that from the magnitude of the unwarranted attack, the perpetrators embarked on what appears to be like an act of terrorism.
naij.com

See What Senators Plan To Do To President Buhari