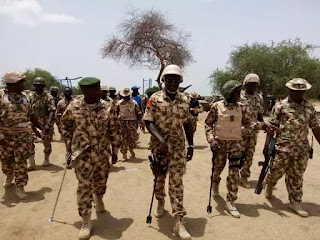 According to naij.com report the COAS stressed that the army has ousted the sect and stopped it from re-grouping anywhere in the country to cause havoc. Buratai spoke in Jos, the Plateau state capital, when he paid a courtesy visit to the Gbong Gwom Jos, His Royal Majesty, Da Jacob Buba, in his palace in Jishe, while on a familiarisation tour of military units and formations under the 3 Division of the Nigerian Army.

On the visit to the Gbong Gwom, Buratai said: “Our efforts in the North-East have really paid off. As you can recall, the incessant bombing of market places and different places of worships and high population areas has virtually stopped now.

I can assure you and the people of Plateau State that they will never witness Boko Haram attacks like you witnessed in the past. “The Army has not only succeeded in routing them from their camps in the North-East, we have been able to block these criminal elements from crossing down to these areas or building their camps anywhere in Nigeria. “I want to particularly commend you on your role as the Gbong Gwom Jos, for all the moral support you gave us through wise counsel. I want to also acknowledge the cooperation of Plateau people.”

Responding to Buratai’s assertions, Gbong Gwom Jos, Da Jacob Buba, said: “The success of the Nigerian Army over Boko Haram did not come as a surprise because I know that the Army has always distinguished itself. “That particular history is still playing itself out. Let me, on behalf of Plateau State, thank you and your men, who have been making sacrifices to work towards restoring peace, law and order not just in Plateau State, but all over Nigeria.”
Credit: naij.com