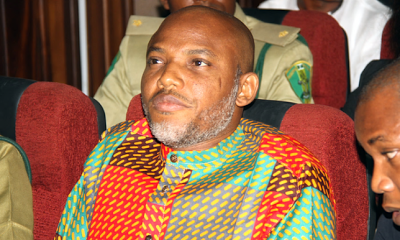 Nnamdi Kanu,the detained leader of the Indigenous People of Biafra, in Abuja on Friday said he was willing to enter into negotiation with the Federal Government to secure his release and end the political crisis which has continued to trail his continued incarceration.

He also denied claims that he was working with some militant groups in the Niger Delta region, including the Movement for the Emancipation of Niger Delta and Niger Delta Avengers.

Speaking through his lawyers, Ifeanyi Ejiofor and Amobi Nzelu, at a press briefing, Kanu said he was not opposed to negotiation to secure his freedom from detention which he described as “politically motivated and orchestrated.”

They however said the IPOB leader would not renounce his ideology for him to be released, because “IPOB is bigger than him.”

Ejiofor said, “Kanu will not renounce his ideology, IPOB is bigger than him. He cannot say yes or no to renouncing it. But he is opened to political resolutions of the problem. Nobody has approached him for negotiation where he is kept.

“The issue of IPOB is beyond him, he is opened to Negotiation, we are not against discussion on this issue. A political solution will be easily achieved than legal solution but Kanu must be released unconditionally.”