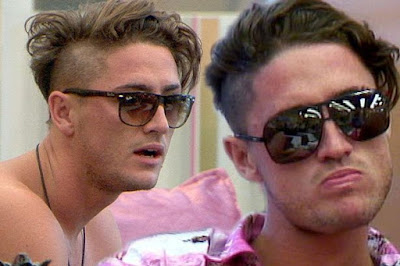 This act of Bear is really funny and unimaginable but totally stunning!
It’s almost as if since Chloe Khan was evicted from the house, Stephen Bear has started to unravel.

Viewers and housemates alike have begun to question what his state of mind is like after he started to act oddly in Monday night’s episode.

Even the person that does the voice overs between programming on Channel 5 said that “Bear is starting to lose his grip,” after the episode aired.

Viewers took their concerns one step further with some proclaiming that he must be suffering with a mental disorder, others saying that he has a younger mental age than he’s aware of, and some flat out claiming that he’s been taking drugs in the Big Brother house

Here is some CBB fans reactions. Well they are feeling sorry for the dude

Is Bear taking drugs in the house? He looks like he’s off his head!! #CBB

.Lo poses with her ex husband Marc Anthony and his new wife in Las Vegas