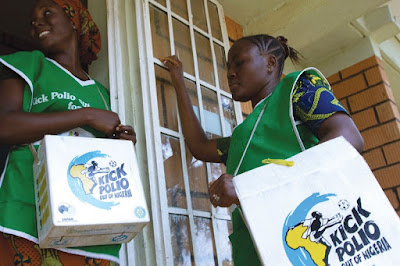 – Eradicating polio from Nigeria
Written by the Editorial board of The Guardian Newspaper
The battle against poliomyelitis, otherwise known as polio, has taken a pleasant turn as Nigeria marks two straight years without any reported case of the dreaded disease. While the development is good, it is, however, not yet time to celebrate as the job is not fully done.

Not until the country is certified totally polio-free by the World Health Organization (WHO) can Nigeria have cause to rejoice and it takes at least three years of no new infection for such declaration to be made on a country.

The good news, however underscores the success of Nigeria’s anti- polio campaign, which in no way, at this time, should mean relenting on the efforts. There should be more aggressive action at the grassroots and in the rural areas to ensure total eradication.

While the government mobilises needed resources, Nigerians should be on heightened surveillance and all the nooks and crannies of the country should be monitored to ensure that the last vestiges of the disease is eradicated.
From this point of view, President Muhammadu Buhari’s promise that the Federal Government and its partners would not rest on their oars but would continue to provide the needed oversight and resources to achieve total polio eradication makes sense.

The WHO and the United Nations Children’s Fund (UNICEF), together with other leading partners in the polio eradication effort, are already urging Nigerians, under the Global Polio Eradication Initiative (GPEI), to be on the alert for any sign of the disease through the heightened surveillance, especially, in the border areas.

After decades of devastation, in July 2015, Nigeria was removed from the list of polio-endemic countries by the WHO. The list had 125 countries.

In a joint statement in Abuja between Nigeria and its partners, an elated President Buhari expressed satisfaction at the historic moment that has brought Africa to the closest it has ever been to eradicating this devastating disease. He added that Nigerians must protect the gains it has made and stay on course to tackle the challenges that remain in eliminating polio for good.

The Minister of Health, Professor Isaac Adewole also said government is building resilience by getting people out of their comfort zones to further enhance the quality of polio campaigns, reach children in difficult areas and continue to improve routine immunization.

Acting WHO Representative to Nigeria, Dr. Rex Mapazanje, advised the country to continue to be on alert for any sign of the disease, particularly, in the vulnerable populations, including insurgency-hit areas of the Northeast and adjoining areas of Cameroon, Chad and Niger. The need for community informants across the country was stressed as a sure way to keep track of the disease.

The UNICEF, through Country Representative, Jean Gough, while acknowledging that achieving a polio-free Africa will endanger a polio-free world, underscored the need to work with all partners, in particular, traditional institutions at all levels, to ensure that every child is reached in order to make this paralysing disease history.

All the partners have appropriately stressed the need for more commitment from governments, civil society and donors to finish the job for Nigeria, for Africa and for children everywhere.

As a further move to boost the eradication effort, the European Union has signed an agreement with the Federal Government to ensure sustainable quality Routine Immunization Services against the wild polio virus.

The efforts of the government and all development partners, who, over the years have committed time, effort and resources in combating polio are indeed commendable.

From all indications, Nigeria is on the verge of becoming polio-free, a development that will mark a landmark in the country’s primary healthcare delivery programme.

Worldwide, record shows that polio cases have decreased significantly by over 99 percent from an estimated 350,000 cases to 74 cases in 2015. The reduction is due to the global effort to eradicate the disease. Today, there are only two polio endemic countries, namely, Afghanistan and Pakistan, from as many as 125 in 1988.
Poliomyelitis is a debilitating infectious disease caused by the polio virus, which affects children mainly under five years of age. The disease presents itself in muscle weakness, resulting in inability to move. It leads to irreversible paralysis in most of the victims.

Now that so much progress has been made, the onus is on the global community to intensify the eradication programme and succeed in making the whole world truly polio-free.