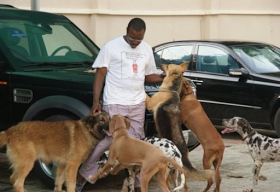 Comedian Ali Baba shared the photo above showing some of his pet dogs and revealed that he named them after different world leaders (Both past & present). Ali Baba claims that former Nigerian President Obasanjo, was aware and impressed that he had a dog named after him. Read below.

“My dogs and I back in the day. Must have had like 12 at a particular point in time. Interesting time. That time I mean. I had traveled and returned at night, but was too tired to relate with them. OBJ, the big Alsatian was the head of the pack. Then Obama was the big black and white Great Dane, the Alsatian on the bummer was Thatcher. Thatcher must have given me like 18 puppies. In her good days (X120k per puppy) the ridge back by Thatcher was called Madiba. It arrived from South Africa on the birthday of Mandela.

The Second Harlequin Great Dane was named after Queen Amina… But the fiercest of my odds were Chaka, IBB AND Abacha. They took no prisoners. In fact, if I gave you anything I had used before, like shoes or clothes,my advice is not to wear them to my home. Because if Chaka, or Abacha caught a whiff of that item on you… You will not like yourself. They were my trusted securities and my friend. One time in LEKKI, 1997 or so, a guy scaled the fence into my compound in the night. I was woken up to a shouts of “Oga come o!!!!!”

“Oga I am finished!” And Usman my maiguard was having a good laugh. At2am! The petty thief was on the roof of my V-Boot. I was more scared for his life than he was of it. Because then we had Chaka, Ghadaffi and Clinton. Those who new these dogs will testify to their brutality. Go ask@basorge_tariah and@officialbunmidavies… But with hind sight now, I am just thanking God. Yes oooo! O have to thank God ooo. That it was not now, that I named my dogs after any sitting president and foreign leaders. In fact, Obasanjo himself was very impressed years later when his friend that brought me a gift from Baba, told him how a dog called OBJ in Ali Baba’s house nearly killed him. Baba used to warn my wife then, that if she ever decided to have a dog meal, she should not touch OBJ… But then again, OBJ had a different kind of personality and a high sense of humor. Everyone can not be the same. So I understand. An that is all I have to say.”