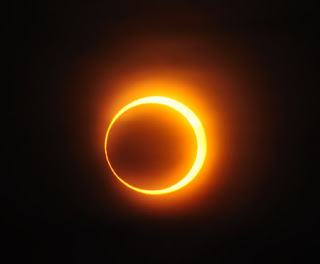 An annular eclipse will occur in all parts of the country with different degrees of totality on Thursday September 1st, 2016.

This is according to a statement released by the Head, Media and Corporate Communications of National Space Research and Development Agency (NASRDA), Felix Ale yesterday August 16th.

According to the statement, the highest degree of obscurity in Nigeria during the annular eclipse would be in the Southern part of Nigeria, particularly in Lagos, where it was expected to have 80 per cent obscurity, while the lowest degree of obscurity would be about 45 per cent and this would be observed in the Northern part of the country, particularly in Sokoto. in Abuja, the annular eclipse will be observed at about 60%.

The eclipse is expected to commence in Abuja around 7.17 a.m, with maximum eclipse to be recorded at about 8.32 a.m. and the eclipse will end around 10.00 a.m. The statement warns that the eclipse is not a spiritual issue but a natural occurrence that can be accurately predicted by science. It warned that nobody should observe eclipse with naked eyes as such act can lead to permanent damage to the eyes.

The Space agency appealed to the general public not to panic or attach any mystical interpretations to this event.

An annular eclipse occurs when the sun and moon are exactly in line, but the apparent size of the moon is smaller than that of the sun, hence, the sun appears as a very bright ring or annulus surrounding the dark disk of the moon.

That we may be Rich - Open Heavens by Pastor E.A Adeboye