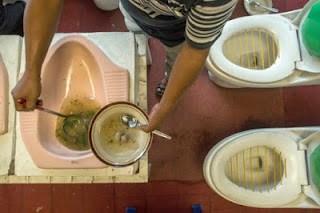 If you ask me, I will say the world is not just changing but the world is going crazy. An  Indonesia Restaurant which serves food from toilet is making huge money as Customers are flocking to it to have an encounter with the latest lavatorial trend. The Toilet-themed Restaurant which enables customers dine on meatballs floating in soup-filled latrines in making wave on the internet…

Guests at the “Jamban Cafe” sit on upright toilets around a table where food is served in squat loos.
And for those who found the whole experience too nauseating, there is a sick bag hanging by the entrance.

Other places, such as Taiwan and Russia, are home to similar themed restaurants, but Indonesia’s
modest version has a key difference — it aims to educate people about sanitation and encourage the increased use of toilets. 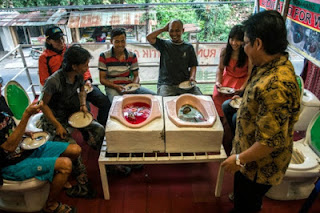 “I was disgusted at first, but I eventually ate some of the food out of curiosity,” said customer Mukodas, a 27-year-old who, like many Indonesians, goes by one name.
“I think the idea is pretty interesting because if you try to have a campaign without a gimmick like this, the information won’t stick.”
Another customer, 15-year-old Annisa Dhea, conceded she initially found the toilet treats “a bit unappealing” but felt somewhat reassured after “the owner told me that the food was clean and hygienic”.
The cafe — whose name “Jamban” means toilet in Indonesian — has been open since April.
Tags
Trend and Event
Facebook Twitter LinkedIn Tumblr Pinterest Reddit VKontakte Odnoklassniki Pocket
Show More
Share
Facebook Twitter LinkedIn Tumblr Pinterest Reddit VKontakte Odnoklassniki Pocket Share via Email Print

Shocking! I Caught My Husband With My Friend's Pant Woman told the Court