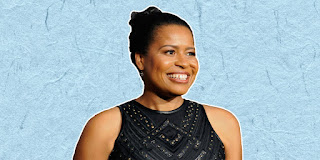 Sometime heartbreaks can inspire and other times it can only bring sorrow and continues heartbreak but for Courtney is different.
Courtney A. Kemp keeps a picture she took of herself at Chicago’s O’Hare airport — her hair in pin curls under a scarf, her breast hooked up to a nursing pump — as a reminder of her own strength. “This is you,” she remembers thinking as she took the photo. “You walked through this. You’ve survived.” She was traveling to Buffalo, just weeks after giving birth to her daughter, to bury her father, a man she adored. Talking about him on this brisk afternoon in March, nearly five years to the day after his passing, still brings her to tears. It’s the type of grief a daddy’s girl never gets over, and the type of grief a writer is compelled to channel into her work. “I needed to write about him,” Kemp says. And so her father became inspiration for James “Ghost” St. Patrick, the drug kingpin club-owner at the heart of Kemp’s hit Starz show, Power.

On the surface, Ghost has nothing in common with Herbert Kemp Jr., a man who worked his way out of poverty to become an affluent advertising exec; he seems more akin to executive producer and star Curtis “50 Cent” Jackson, a one-time drug-dealer and Kemp’s right-hand man in creating the character. (“He is a great storyteller,” Kemp says of her friend and colleague. “We’ll get on the phone and talk, and he’ll tell a story and I’m like, ‘OK, I’ll take this piece and this piece, and marry them together.'”) What the three men have in common is that they’ve all hustled to make a way out of no way. Continue reading in style
Source: cosmopolitan