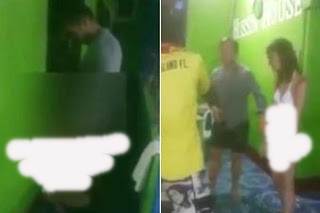 People play dirty in the public. Can’t imagine what has gone over them. How can couple not contented with doing such stuff in the secret, at least respect womanhood and that of manhood. It is regretting and absolute shameful.

According to Mirror A randy couple were caught on camera performing oral s*x act just feet from a busy street in Thailand. Imagine this!

Furious passersby on the party island of Phi Phi filmed the shameless couple, who claimed to be Irish and American.

The grainy footage begins as an English-speaking local rounds a corner where the woman, dressed only in a white bikini , is seen kneeling in front of the man doing the act.

She is clearly pleasuring him as the pair continue their antics, seemingly unaware of their surroundings.

But an angry local man then shakes at the foreign man’s arm and begins shouting at the couple.

The pair are understood to have been outside the The Hussin House Hotel. Photos and video here

A Shocking Interview With Militant Commander (A Must Read)