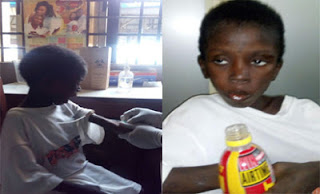 Thank God for the help of NDSC who came for the rescue of little Korede Taiwo. Who knows what would have happened?
The Ogun State Police Command has handed over the 9-year-old boy, Korede Taiwo, who was chained by his father, Francis Taiwo, to the Ogun State Government.

Korede who was brought to Zone 2 Area Command, Oke Ilewo, Abeokuta by the police team led by the state Public Relations Officer, Muyiwa Adejobi, was later handed over to officials of the state Ministry of Women Affairs and Social Development at the Zone 2 area Command, Abeokuta. 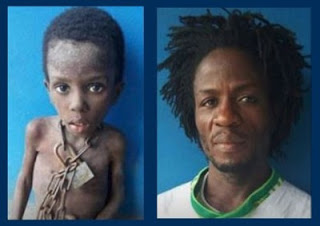 Korede, was rescued last Friday by operatives of the Nigeria Security and Civil Defence Corps and handed him over to Ogun State Police command for further investigation. He was handed over to the Director of Social Welfare Services in the ministry, Mr. Shotubo Olumide by the Officer-in-Charge of Anti-Human Trafficking of the Command, Oluwatoyosi Bello, a Superintendent of Police.
Meanwhile, Korede’s father and his step mother, Kehinde, who were present at the Zone 2 Area Command but were not allowed to witness the handing over ceremony. Francis, the pastor in charge of Key of Joy Celestial Church of Christ, Ajibawo, Ado Odo/Ota Local Government area of the state, regretted his action begged for forgiveness. He said, “I didn’t know there is punishment for my action but now I know. I regret my actions.
I want forgiveness from the government.” Korede’s step mother also pleaded with the government to forgive her and the husband. He said “We used to advise him(Korede) but because we don’t know the implication.
Tags
Latest News
July 26, 2016
Share
Facebook Twitter Pinterest