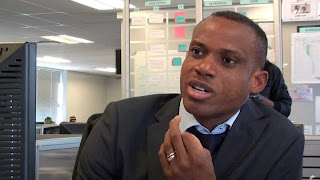 The former Super Eagles Boss, captain and midfielder still feels angry at the way he left the coaching role of the Super Eagles in February and the negative perception Nigerian football lovers have of him and has now blasted the NFF president Amaju Pinnick , executive committee member Christopher Green and players like Mikel Obi and Vincent Enyeama.

In a long revealing article written on his website Sundayoliseh.tv and  titled “My Recent Near Death Experience As Coach Of Nigeria,’ the FIFA technical committee member said his mind in it’s entirety. Very revealing! Read more after the cut.

“One day whilst coaching the super Eagles in Abuja stadium prior to the Burkina Faso game I all of a sudden felt dizziness, light headedness, headache and could barely stand,” Oliseh narrated. “I managed to finish the session before calling on the doctor into my room who was clueless to what was happening.
“From then on it was sleepless nights, loss of appetite, high blood pressure and before I knew it I started losing weight.
“After several visits to doctors abroad nothing was found though the doctors found anomalies they couldn’t pinpoint the actual illness to.

“Prior to the away trip to Burkina Faso for the final CHAN qualifier game in Port Harcourt after lunch I was struck with the worst feat of this illness again. Could not walk, talk, dizzy and felt like I was going to pass out.
“I quickly demanded to be rushed to the airport and with the evening flight travelled to Germany to see specialists .After 2 days of nonstop tests I was diagnosed to have narrowly escaped a total collapse in Nigeria.

“For weeks I was bed ridden, lost 7 kilos and could barely walk 5 metres without sitting down. My family was petrified and all feared the worst. One thing was for sure though: had I not taking that evening flight to Germany when I did, there was a strong possibility of a far worse outcome. Thank God for his mercies.
“All through the last 4 months of my tenure as coach I was far from my complete healthy self and coached the team and stayed in my bedroom. Often on my bed or sofa.

“Imagine how betrayed and pained I must have felt with the lack of support at these life threatening times from my employers the NFF and the shady pressmen who made it a duty not to report the gravity of the illnesses that befell me and my assistant to the Nigerian people and kind of like wished us the worst!
“On the day I put in my resignation letter I was still far from my best health wise and I guess it is better staying alive than getting embroiled with these people who have no interest of Nigeria at heart.”

Oliseh added: “A day after the Late Stephen Keshi was relieved of his duties as coach of the Super Eagles of Nigeria, I got a phone call from the Nigerian Football Federation (NFF) offering me the job which I immediately rejected. The call lasted just 2 minutes!
“I was to further refuse the offer twice again in the next 2 days that followed as they kept on calling. Their argument: With the new president Muhammadu Buhari in place, the Nff was ready for a change and was abandoning their old ‘Shady’ ways!

“It took the intervention of a phone call from a highly ranked federal government official for me to budge. His point was simple “your country is in dire need of your services and the NFF promised me a change, put your terms in writing and if they do not accept it, let them go elsewhere”.
“Which is what I did and we all eventually signed a working agreement. Thus began the adventure to coach the Super Eagles of Nigeria. Sometimes I wish I stood my grounds and refused their offer, but I guess the urge to help my country was just too much to ignore.” Read more