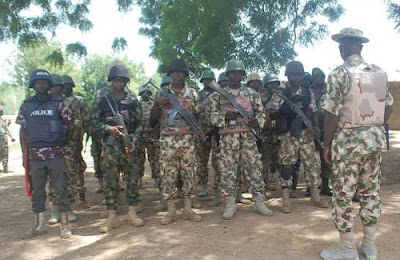 At least 100 people suspected to be militants have been reportedly killed as the Nigerian military on Saturday continued the aerial bombardment of Fatola, the base of militants and pipeline vandals in the Arepo area of Ogun State.

One of our correspondents who was around the scene of the incident at the time, observed that the attack started at about 12pm and lasted for about 30 minutes.

Our correspondent counted at least eight missiles fired by a fighter jet, which flew across the creek at intervals.

Another aircraft was observed hovering around the area.

Residents, who were caught unawares, ran for their lives due to the ground-shaking effects of the missiles.

Business activities were grounded and many residents fled their houses for fear of being hit by missiles.

A resident who was on the road when the shots were fired said the Saturday attack was more intense than previous air raids.

Speaking on condition of anonymity, she said, “The air raid started on Thursday evening. It was just a missile that was released, but the effect was serious. On Friday evening, another airplane which flew across the creek released gunfire which lasted for some minutes. I could hear the shots as if they were fired close at me. But the Thursday and Friday attacks were child’s play compared with that of today (Saturday).

“The aircraft releasing the missiles had three short wings with a sharp mouth. It maintained a visible presence in the sky and anytime it wanted to fire, it flew down as if it was about to crash. I never knew the military had such a weapon.”

Another resident, who also spoke on condition of anonymity, told our correspondent that he lay flat in his apartment during the Saturday attack.

He said, “I was alone in the house with my son. The boy shook with fright every time a missile landed. I carried him and lay flat on the floor. The missiles shook the whole ground. I am not sure if I would  continue to live here because of this. My landlord left with his family yesterday.”

A source close to the millitants told SUNDAY PUNCH that the missiles levelled the base of the militants, adding that more than 100 people were killed.

He said, “The whole place has been levelled. From the information I just gathered, those killed today (Saturday) cannot be less than 100. I am aware that some of them (the militants) are presently in the waters where they are hiding. They are making calls and seeking escape routes from the place.”

He said the men could regroup and cause greater havoc if given a breathing space.

He said, “The heat is on them. One of them said it was because of the kidnap of a monarch in Lagos (Oniba of Iba) that the missile attack was intensified.

“He said he had asked his colleagues to release the monarch, but they didn’t listen. I am aware that the monarch will be released between today and tomorrow, if he has not been killed.

“The military should deploy secret officials in Ibafo, Pakuro, Wawa and other villages. I believe those places will be their next hideouts. They must not be given any breathing space. If they are allowed to regroup, there will be serious problems.”

He said, “The joint operation will continue until the area is secure and free from all forms of unwanted and criminal gangs whether they are militants or vandals.”

Abubakar, told one of our correspondents on the telephone on Saturday that while he would not confirm the exact casualty figure, the knew that some of the camps of the vandals were destroyed.

He gave the assurance that the military would ensure the destruction of more camps in the ongoing operation.

He said, “No, we cannot confirm the exact casualty figure in the operation. There are so many camps, and we will continue to  destroy them in that operation.

“We have taken some camps. The casualties cannot be confirmed but I know that we were able to target some of their camps and locations.”

Meanwhile, in an attempt to forestall the spate of militants’ attacks, the Onijegun of Ijegun land in Lagos State, Oba Nureni Akinremi, on Friday convened a meeting at his palace.

Sunday PUNCH learnt that the meeting, which was attended by all the chairmen of community development associations in Ijegun, examined the solution to security challenges posed by the militants.

A source close to the palace and who also attended the meeting told one of our correspondents that the community had resolved to hire members of the Oodua People’s Congress to man strategic locations in the neighbourhood.

The source added that operational vehicles, motorcycles and walkie-talkies would be provided for the operatives to ensure effective performance.

He said, “We have agreed to engage members of the Oodua People’s Congress for the protection of the whole Ijegun against all the attacks that claimed lives in the community.  We plan to hire 70 guards who would be deployed in various strategic points in the community.

“The guards are specifically meant to checkmate militants’ attacks but they will also be working with the existing security men in each CDA. We have budgeted N5m to ensure their smooth operations and they will start by Monday.

“People have made donations and contributions are on going in each CDA. We want to buy three buses and at least 10 motorcycles to aid their operations. We have already bought walkie talkie for them to communicate with one another and they are well armed. By God’s grace, the buses will be available on Monday.

“The operatives are a registered security organisation and they have their uniform and identity cards.”

The source added, “Apart from that, we have resolved that from 12am till 5am, no okada rider will be allowed to operate in the community except there is an emergency.

“We also want to create awareness for all residents on the need to be security conscious. We are going to do this through distribution of pamphlets and announcements on radio stations. The abduction of the Oniba of Iba and attacks on communities in Lagos and Ogun states are very disturbing. That is why we are taking all these measures.”
SourcNewsPunch News

See what happened to Nigerian tomatoes as it crashed A MUST READ! MESSAGE TO THE CHURCHES