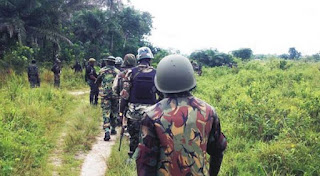 The Nigerian Army has announced that some of its troops that went missing after an ambush by Boko Haram, have been found.
The statement says about 19 soldiers and officers were missing in action after they were ambushed by Boko Haram militant on their way back from a clearance operation at Guro Gongon village on Wednesday, July 20th.
Army spokesman, Colonel Sani Usman, in a statement on Saturday said concerted efforts were initiated to search for and rescue the soldiers. The measures include the use of air assets, Special Forces and patrols.

“We wish to inform you that the search party has this morning found 5 more officers and soldiers that were declared missing in action, including the unit’s Commanding Officer. Although they are in a stable condition, have been moved to our Medical facilities for medical care”