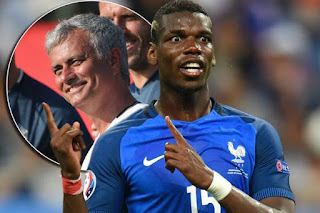 Officials from the Premier League club met with their Juventus counterparts earlier on Wednesday to discuss a deal to bring Pogba back to Old Trafford.

It is now understood that United have settled on a fee of €110m for Pogba, which eclipses the previous record set when Real Madrid paid €100m for Gareth Bale in 2013.

Jose Mourinho, the new United boss, has been keen to ensure Pogba returns to pre-season training – after helping France reach the final of Euro 2016 – with his Reds and not Juve.
Manchester United have agreed a world record deal to sign Paul Pogba for €110 million, Goal understands.