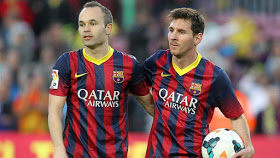 Following the failed military coup in Turkey the reigning World footballer of the year Lionel Messi and his teammate Andres Iniesta have cancelled their flights to the country.

The pair were scheduled to join other football stars play a match in Turkey today Saturday July 16th that was organised by Samuel Eto’o, their former teammate, to commemorate the 10th anniversary of his charity foundation. However, the match has been cancelled after a military coup was attempted in Turkey late Friday night.
Barcelona football club posted a Tweet confirming both players were in Spain and wouldn’t be traveling to Turkey for the match. 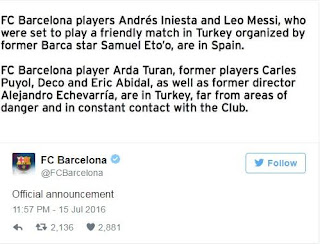 Gov. Fayose: The EFCC and its spin doctors can continue to cook up stories