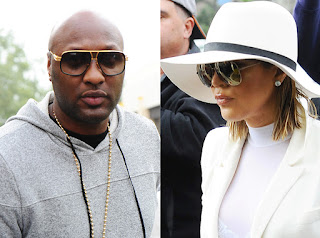 Sometimes crisis are meant to strengthen relationships and marriages and to weaken it. It is never idle to give in to defeat in crisis which may lead to separation or even divorce as some may cosider it. It is my opinion.

Lamar Odom and Khloe Kardashian are going through divorce, am sure ya’ll know, ok great, Now Lamar is requesting for  a ‘no’ to spousal support, like after the divorce, no support what so ever from the both sides, According to E!online,
The NBA star filed a response to the E! star’s filing from May today in a Los Angeles Superior Court, reiterating that “irreconcilable differences” was the reason for the dissolution of marriage, but also requests that the judge deny the court’s ability to award Khloe with spousal support.
The court documents, obtained by E! News, also state that Odom has requested all attorney fees and costs be paid by Khloe.

Sad! Spanish Bullfighter Killed by the Bull during contest

Our Gucci President amidst of Financial crunch